Marine litter is found in all the oceans of the world. It is found not only in densely populated parts of the Commonwealth but also in remote areas, far from obvious sources and human contact.

Up to 90% of marine litter is made up of plastics, originating from both land and sea-based sources.  This makes plastic pollution one of the most widespread problems facing our oceans today. If we are to tackle this issue, urgent, coordinated and effective action is paramount. Globally, it is estimated that 6.4 million tonnes of marine litter enter the oceans each year, with about 8 million items entering the oceans every day.

Preventing plastic pollution from entering the environment will require focused efforts on behaviour change such as reducing our reliance on single-use plastics, improvements in waste management, and developing a more sustainable life cycle for plastics. 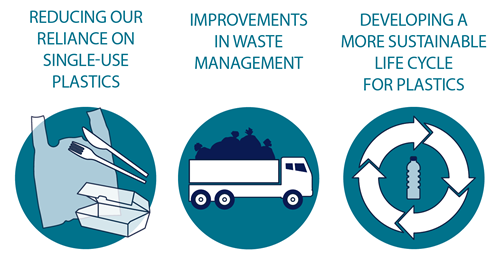 Cefas will work with partners across the Commonwealth to share expertise and find solutions to the environmental and socio-economic problems caused by litter in the marine environment. Scientists will be collaborating with national governments, local authorities, regional sea conventions, NGOs, universities and industry to identify country specific solutions. Cefas will work alongside international organisations, such as the United Nations, to ensure actions are coordinated on national, regional and global levels, with activities that are already taking place to tackle marine litter.

CLiP will work with five countries across the Commonwealth to encompass a variety of geographic, economic and environmental differences and enable a wide breadth of issues to be addressed. The programme is starting in the South Pacific Region in November 2018, working with Vanuatu and the Solomon Islands. The programme will work in the South Pacific, Caribbean, Asia and Africa.

The programme will encompass the following five pillars:

The programme will contribute to the UK meeting its responsibilities under the Commonwealth Blue Charter, which calls for Commonwealth countries to drive action and share expertise on issues affecting the world’s oceans, including marine litter. CLiP will contribute to delivering the objectives under the UK and Vanuatu-led Commonwealth Clean Oceans Alliance (CCOA), which calls on other countries to pledge action on plastics. CCOA also promotes actions in line with the United Nations Sustainable Development Goal 14 (life below water) to conserve and sustainably use the oceans, as well as contributing to the UK Government’s 25 Year Environment Plan.

CLiP forms part of the £61.4m package of funding announced by the Prime Minister during the Commonwealth Heads of Government Meeting (CHOGM) Summit in April 2018. CLiP forms one strand of this Official Development Assistance (ODA) package and will complement additional activities, specifically those related to marine litter and waste management, by other UK government departments. Work streams will be co-ordinated to maximise outputs across the Commonwealth.

CLiP, is being delivered by Cefas. Funded by Defra, the programme will support five developing countries across the Commonwealth to develop national litter action plans focusing on plastics entering the oceans.