Despite the number of stations included here, there is a significant spatial gap in the South West coastal region. There is no climatic grouping for the remainder of the Irish Sea because there are an insufficient number of stations that run for the base period of 1971 - 2000.

Comparisons have also been made between the temperatures recorded from the ferry route (Position 2) and the most appropriate inshore temperature network station (Figure 8). 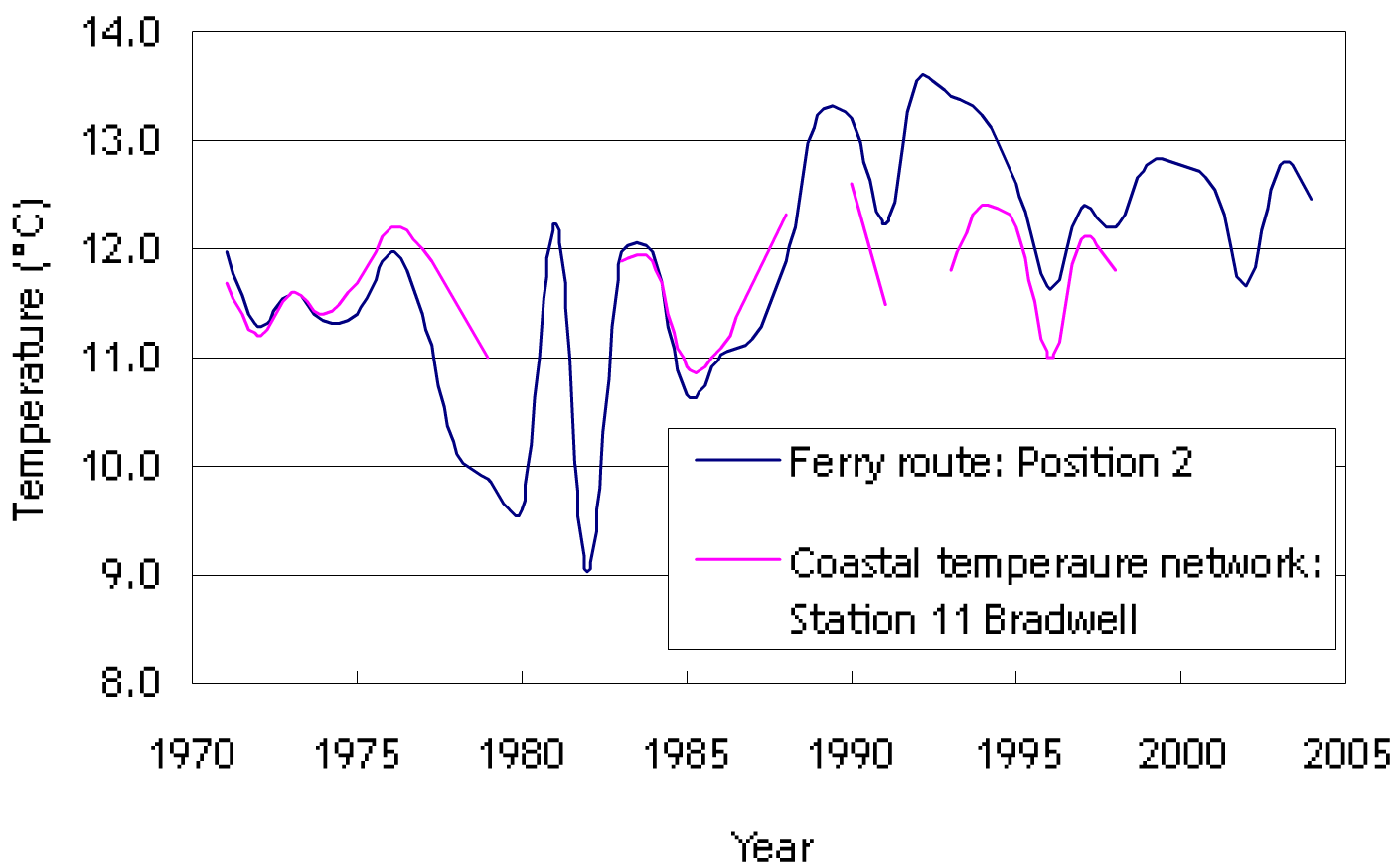 All of the coastal sea areas show an overall increase in temperature during the last 20 years (Figures 3 - 7). Combining a group of twenty coastal stations which have similar statistical characteristics, the average temperature rise in inshore waters is 0.3°C per decade since 1966 but with a greater rate of warming (0.5 to 0.75°C) in the last 20 years. 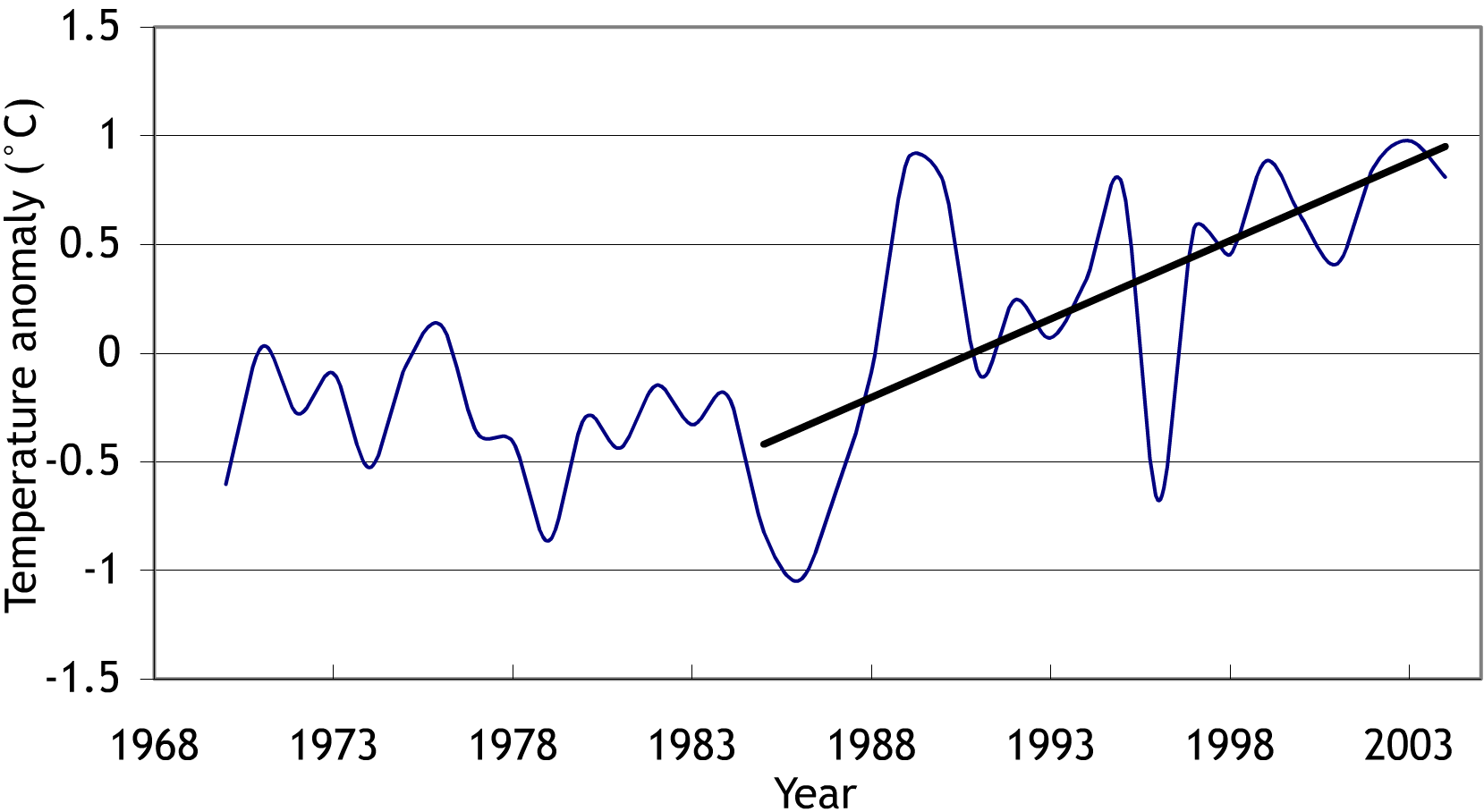 In Figures 3, 4 and 7, for the East coast, the Thames and the Irish Sea, 1979, 1986 and 1996 show colder periods with 1986 and 1996 showing the most abrupt changes.  The Eastern and Western Channel areas (Figure 5 and 6) show the same trend apart from experiencing a more abrupt colder period in 1991 than in 1996. Although the very cold year of 1979 was most pronounced in the Irish Sea, in other regions, the western channel, eastern channel and Thames region, this cold period extended for three years from 1978 - 1980. The extremely cold period in 1986 was evident in all of the sea regions. 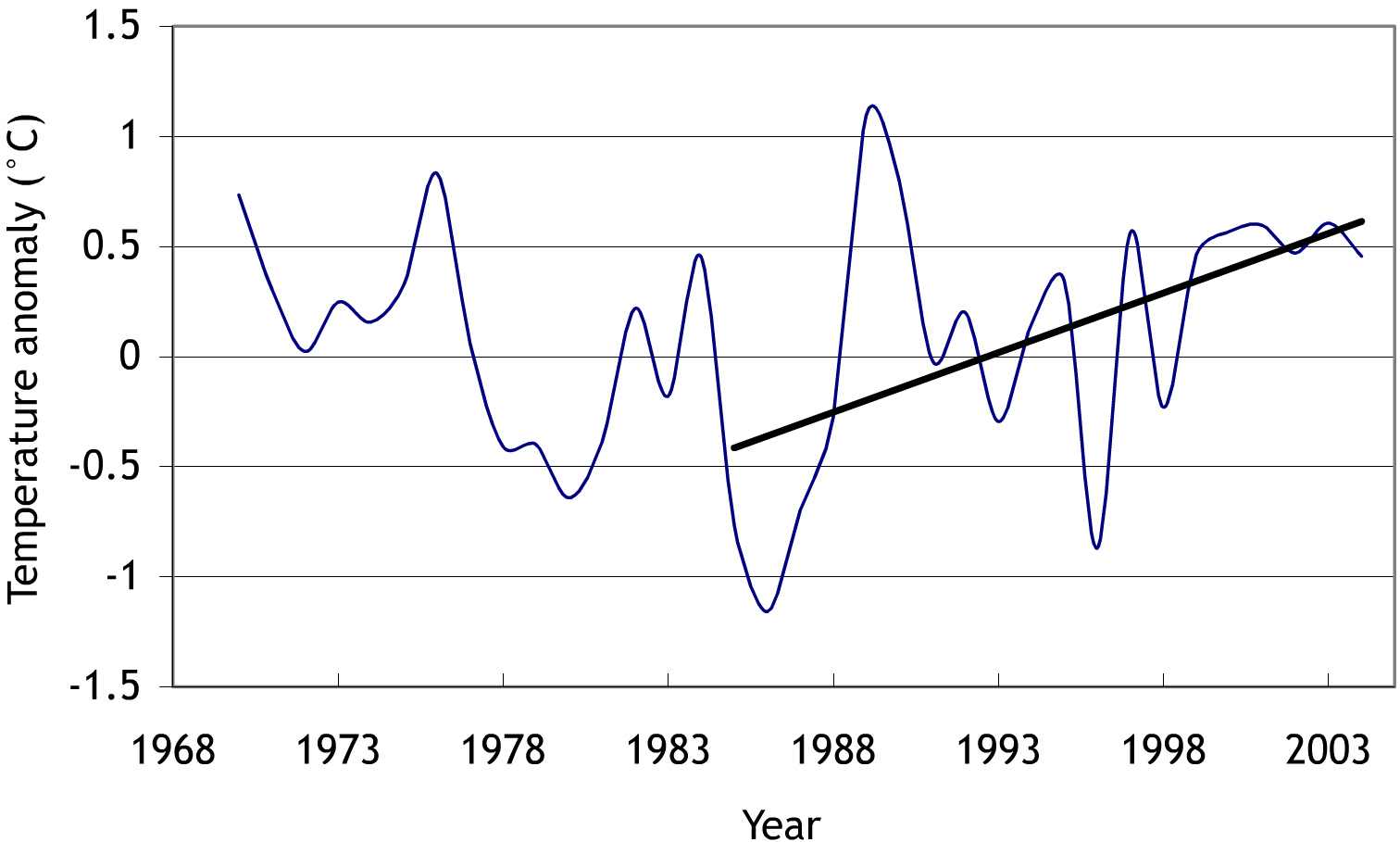 Following this, was a dramatic shift in all sea areas (1988 - 1990), with a sharp rise in temperature leading to two very warm years of 1989 and 1990 with continued temperature rise since that time, with all areas showing similar trends. Previous to this warm period, a short warming period occurred, starting in 1973 and reaching a maximum in 1976. It was most pronounced in the western Channel but was also evident in the other regions. 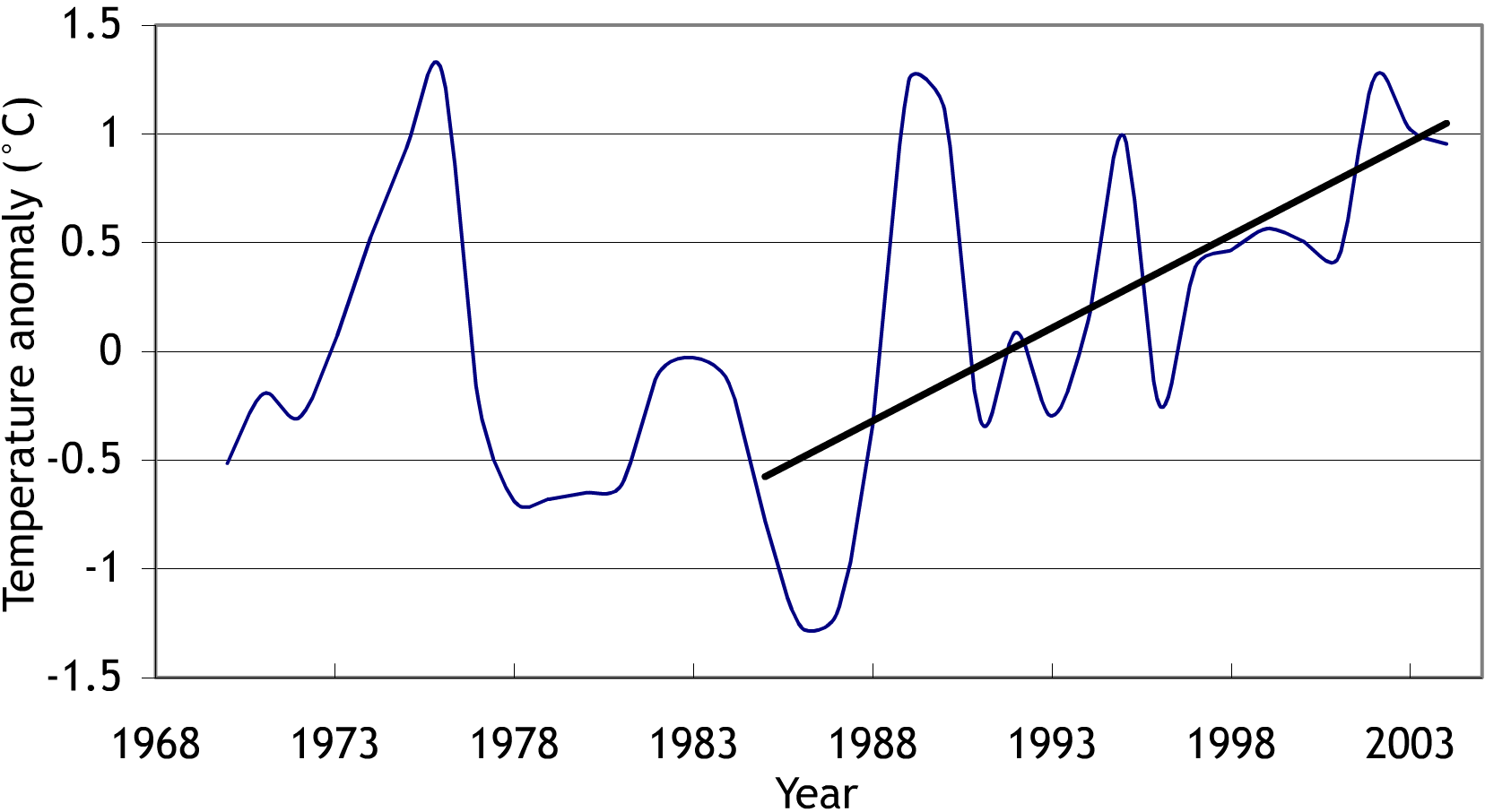 The seasonal cycle of salinity is evident from Figure b, positions 2, 4 and 7. The lowest salinity is consistent across the transect, occurring in May to June, but with greater variability in the time of maximum salinity, usually in the winter months. Variability in all the salinity records is high but especially large in the summer months. It is postulated that this variability is dominated by flow through from the English channel (Dickson et al., 2003). 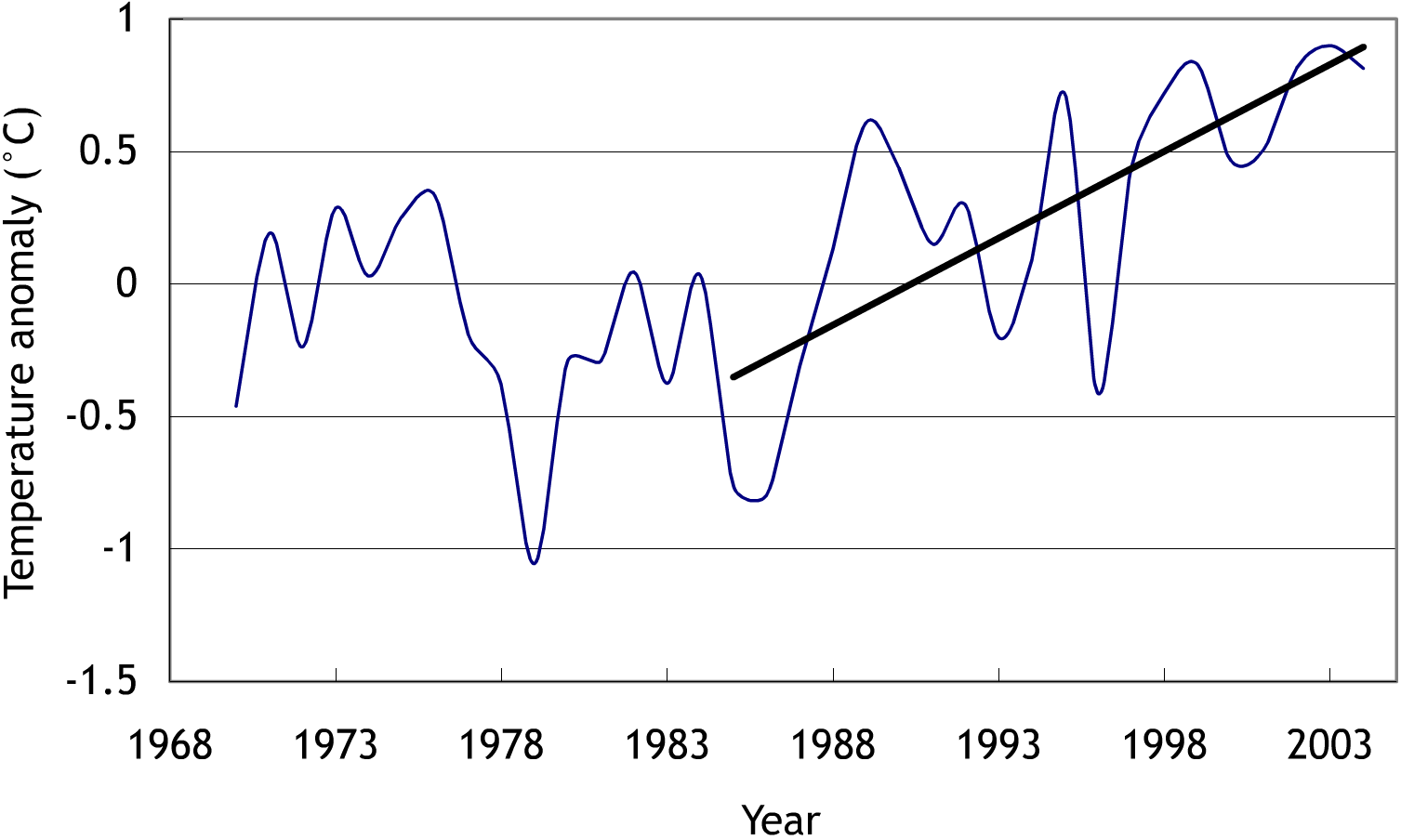