Adult salmon that have spent a single year at sea (one-sea-winter salmon or ‘grilse’) start to return to rivers to commence their spawning migrations. The photo shows a returning salmon caught on the River Tamar by the Environment Agency and the Game and Wildlife Conservation Trust who are working together to learn more about salmon and sea trout behaviour. Find out more

Summer is typically the time when catches by nets chiefly occur – netting seasons typically run from June to August inclusive. Salmon are a valuable food source at all life stages and can be predated on at any time. Losses to predators diminish as the fish get larger, but even large adult salmon can be eaten by species such as seals, dolphins and porpoises as they migrate back through coastal waters and estuaries. 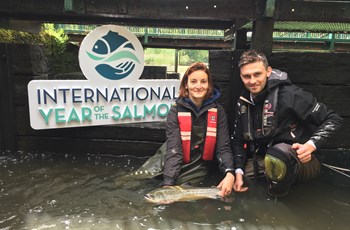 The salmon smolts move rapidly north using prevailing currents to mix with smolts from other countries in a post-smolt nursery area in the Norwegian Sea before dispersing more widely in the North Atlantic.

Juvenile salmon in rivers are feeding and growing relatively quickly. Young fry can be susceptible to high losses, particularly if adverse conditions such as low flows prevail. 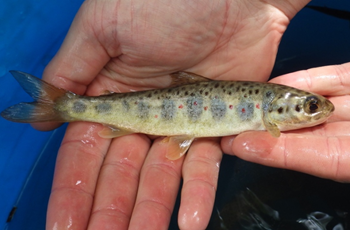 Smolt runs continue, with the peak of their migrations timed to take advantage of optimal conditions for feeding and growth in coastal waters. The smolts then move rapidly offshore and commence their epic, large-scale oceanic migrations.

After hatching, the alevins stay in their gravel nests for several more weeks, feeding on their yolk sacs. They ‘swim up’ from the gravels in April in order to start feeding; at this stage they are known as ‘fry’. This is a particularly hazardous stage in their lives as they disperse and establish territories in order to seek shelter from predation and high flows, while also taking advantage of food drifting past in the currents. Many fry are lost in the first few days and weeks after emerging.

Many older juveniles, known as ‘parr’, that have typically spent 1 or 2 years growing in freshwater, start the transformation process that enables them to adapt to sea-water. The fish become silvery, abandon territories and start to shoal up and migrate downstream as ‘smolts’. The main smolt run typically takes place in April in more southerly rivers, but later in cooler rivers further north.

The scientific stock assessments for the 64 principal salmon rivers in England and Wales are prepared, in time to report to the ICES Working Group on North Atlantic salmon (WGNAS), contributing to international stock assessments.

Multi-sea-winter salmon continue to return to rivers. Rod fishing seasons for salmon now open on most rivers, although subject to mandatory catch and release measures.

The eggs develop over the winter in their gravel nests. The time when they hatch depends on the water temperature, with faster development in warmer water. Earliest hatching can happen in late February in the most southerly rivers. Eggs can be susceptible to wash-out if floods occur at this time of year.

Small numbers of large salmon (those that have spent a minimum of 2 winters at sea commonly termed multi-sea-winter salmon) start returning to rivers to commence their upstream migration.

Rod fishing seasons for salmon open on some rivers to take advantage of these early ‘spring’ fish, although subject to mandatory catch and release measures. National Spring Salmon Byelaws were introduced in 1999 to provide additional protection to these early returning fish and remain in force.

Most Atlantic salmon die after spawning. However, a small proportion, mostly females, survive and return downstream as kelts to feed and recover in coastal waters. Some will return to spawn again the next year.

For juvenile salmon in rivers, low water temperatures and reduced food availability mean that growth is slowed until the water starts to warm up again in spring. 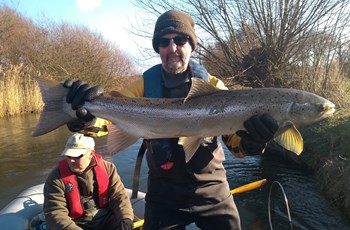 Spawning – this month, adult male and female salmon pair up in the headwaters to spawn. The fish undergo marked transformations prior to spawning, becoming coloured and with males often developing distinctive hooked jaws. Males vigorously compete for female partners in the spawning areas.

The female lays the orange eggs in a depression excavated in the river gravels – this is called the redd. She lays about 1100 eggs for every 1 kg she weighs. After fertilisation by the male, the female covers the eggs with gravels to protect them. 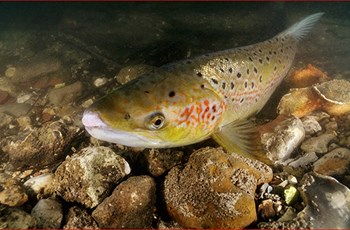 This is an ideal month to see adult salmon leaping over waterfalls, weirs and other obstructions as they migrate up rivers to reach their spawning areas. 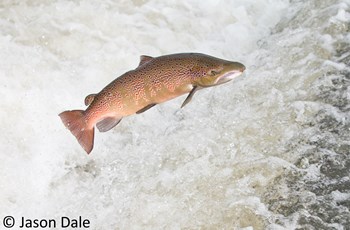